Since 2002, we have been helping parents create memories for their children that last a lifetime. Charlie’s Pride Ponies has a well-known
reputation for the care and treatment of our animals. This is a love and a passion that has spanned decades.

Charlie’s Pride Ponies is fully insured and we look forward to serving you.

Love ponies and kids? Inquire about purchasing this company.

Located in Seagrave, Ontario, Charlie’s Pride Ponies offers pony rides, lessons, boarding, sales and leases throughout the GTA, including the regions of York and Durham, east to the Mississauga area, north to Coldwater and Kawartha Lakes, and as far as Peterborough and Newcastle. Our kid-friendly ponies are perfect for beginning riders, birthday parties and corporate event
entertainment. Our ponies are often invited out for school programs and do especially well among children with special needs, who build confidence and acceptance through their interactions with our four-footed friends.

Are you planning an event, birthday party, family reunion or get-together that would be greatly enhanced with pony rides? Charlie and our stable of ponies are truly a hit at fairs, parades and birthday parties. Party rates depend on the number of hours and the number of ponies required. Our most common request is for two ponies for an hour at $245, plus travel. Most parties are well served by one hour with the ponies. This timeframe fits nicely into a majority of party schedules, even the
short, two-hour parties. Of course, additional time and ponies are available for larger, extended family occasions, as well as multi-hour events.

Event organizers hire Charlie’s Pride Ponies to liven up outings and festivities where a number of children will be present. Many even keep us on speed dial! Pony rides are a fabulous attraction, bringing in people who might not otherwise attend your event — but, when their child gets a chance to ride a pony, all that changes! In urban areas, ponies also generate a lot of excitement!

“Thanks again for yesterday. Everyone loved it! I will definitely book you again for next summer!”
- Heather V. P., Marketing Coordinator at Village of Taunton Mills 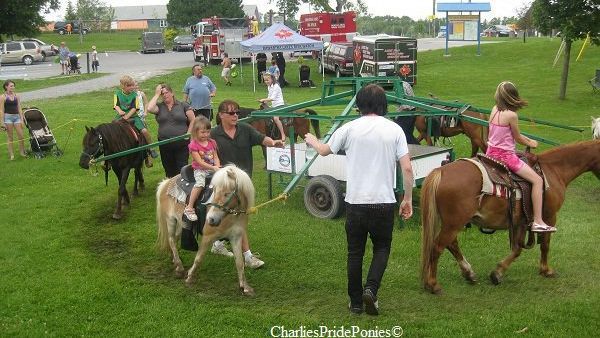 Well, it all started with Charlie of course. He joined our family in 2000 with an eye toward the grandkids. And, while he took eagerly to this task, there was no doubt that he was seriously under-utilized. With his stable mates coming and going each day, attending to their own careers, he became increasingly frustrated, finally demanding our attention.

Charles was wanting a job!

With his trademark enthusiasm, Charlie learned how to pull a cart and with the arrival of Levi, branched out into teamwork. It wasn’t long before he suggested we expand into a full-fledged pony operation.

Today, as CEO, Charlie oversees his stable of employees, diligently riding herd on his staff of 17. By following his careful hiring criteria, we have acquired a work force, all of whom are versatile, well versed in all aspects of the business - from educational programs, providing riding lessons, working with special needs kids, joining parades, parties and numerous other events, even to being able to take their turn on the carousel or pulling a wagon.

Our ponies come from various sources, indeed many are rescues. Having spent a few years with us, being thoroughly schooled through our program, they then move on to their ultimate homes and a “child of their own”. A major new development is the arrival of a couple of “girls”. Our all-male chorus is craning over the fencing to secure the best position to see and be seen.

Drawing on his years of experience, Charlie often volunteers to assist his humans with the training of client ponies in the arts of riding ponies and/or harness ponies in addition to barn manners and pasture politics.

Charlie's Pride Ponies, an alumnus of the Canadian Pony Club, is a fully insured company with memberships in the Ontario Equestrian Federation, the world’s Federation Equestre Internationale and the Chamber of Commerce.

Charlie's Pride Ponies is based in Little Britain, ON with service extending across the Kawartha Lakes area.